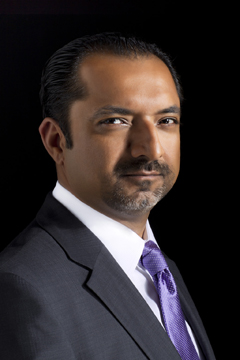 Twice a year, Great Clips, Inc. holds a meeting with its franchisees called Growing Your Organization (GYO), and it’s all about just that: ideas, tools and tactics for growing your franchise business. At the most recent GYO, we invited Aziz Hashim to be our keynote speaker. Aziz is founder and General Partner of NRD Capital, the first business fund both sponsored and managed by a multi-unit franchisee. He has been recognized by Nation’s Restaurant News as one of the 50 most powerful leaders in the foodservice industry, and is widely regarded throughout the franchise industry for his leadership and success as a multi-unit franchise operator. (You can learn more about Aziz here).

This guy has been wildly successful in at least half a dozen franchise brands—growing to 60+ units at one point. After being approached by so many franchisors to help them grow their brands, and seeing how few of them treated their franchisees as partners, he decided to join the franchisor ranks. He formed a private equity fund with other successful multi-unit franchisees, and they will start buying some franchisors and running them “the right way.”

We invited Aziz to speak at the GYO since we know our franchisees like to hear from other successful, multi-unit retail franchisees. Aziz was invited to listen to a handful of our existing franchisees speak on the Sunday night before GYO officially started. That’s the session where the rookies get up and talk about themselves and their business. It’s also the session where a handful of veterans get up and talk about their history in Great Clips (the good times and the bad times), the help they’ve received from others, how they’re bringing their kids into the business, etc. A few of the speakers got quite emotional recollecting the ups and downs, and thanking the larger franchisee community for its assistance and support through the years.

Aziz spoke to the group the next day, talking about everything they love to hear about: how to retain key employees, how to transition a business to a key employee or family member, whether and when to consider expanding into another brand, how to secure funding when you’re growing like a weed, Affordable Care implications, why they should get more involved with the IFA’s legislation efforts, etc. He did a terrific job—never using notes or a PowerPoint presentation—and got rave reviews from the group.

Later in the evening, after hearing our franchisees talk and watching us all mingle at the reception, Aziz approached Great Clips President Steve Hockett and shared this observation: “The relationship you all have here is very special, one that I rarely see in other franchise companies.”

What Aziz saw at the GYO—the engagement, the friendships, the stories, the trials and tribulations, the listening—is what he’s trying to replicate in other systems. He kept thanking us for the opportunity to see a great system up close.

I share Aziz’s comments because I know—personally and professionally—how hard it is to brag about our accomplishments. (Blame that on my upper Midwest roots and stoic heritage, I guess.) But when someone as prominent and experienced as Aziz is in the franchise industry says, “You’re doing this right,” it’s a smart thing to listen to him!

What Aziz witnessed and then shared with us was incredibly meaningful to me, and I thought it might be to others as well. Every now and then it’s nice to hear that we’re doing things well, even though we never stop trying to improve.

Aziz was generous enough to accept our invitation to follow up on this conversation, and in future posts, he’ll offer his thoughtful and provocative insights about the current state of the franchise industry, and what he looks for when considering making an investment in a specific brand.